Smuggling was naturally rife all along the Angus coast in not so ancient times, and is recalled in names like Rum Ness at Auchmithie. The Smugglers' Cave near Arbroath was used to store illicit goods and the haunted reputation of other nearby caves was likely a means of keeping the curious locals away.  There is close by The Forbidden Cave, which has a daunting story to match its name. One day a man named Tam Tyrie took shelter here one stormy night, accompanied by his wife and his dog.  In order to drown out the wild sound of the wind and the thunder, and perhaps to keep up their spirits, Tam played his bagpipes.  But in the morning all three occupants of the cave had disappeared.  The farmer at Dickmountlaw, a mile inland, swore that he later heard bagpipes playing a Highland air far below his hearthstone.  A similar tale is told about Piper's Hillock on Tulloch Hill, Glen Clova.  Here a piper entered a presumably fairy infested cave bravely playing.  But the sound gradually faded away and he was of course never glimpsed by fellow mortals again.  This site, near Cullow, later became a graveyard.
Jock's Road, the well known hill path  from Deeside to Glen Doll, is said to be named after a smuggler named Jock Winter who also gave his name to Winter Corrie in Glen Clova.    Johnny Kidd's Cave in Glen Esk may commemorate another smuggler.

For many years smuggled gin and rolls of illegally imported tobacco were regularly brought into Montrose, along with such curiosities as smoked reindeer tongues and muskrat tails, the latter used to keep moths out of linen cupboards.  Excise men had to deal not only with coastal smugglers, but the production and distribution of the 'water of life'.  Peat reek whisky was made in illicit stills high in the mountains above Glen Esk and Glen Isla, as well as other places. Forfar people used to purchase illegal spirits in Gleneffock and there were illicit stills on Craig Soales and The Rowan.  For both distillers and government officers there was a risk of losing their lives as they tried to foil each other.  A whisky smuggler was once stopped at Auchterhouse in the Sidlaw Hills by a gauger who suspected that the sack he was carrying contained whisky.  He punctured the sack, then set the man loose and told him to run for his life, shooting at him as he fled.
In the year 1813 two customs men recovered ninety-five gallons of whisky at Auchterhouse.  While they were transporting this back to Dundee, they were ambushed by three smugglers.  One of the criminals was shot in the neck and one officer suffered cuts and bruises.  The smugglers recovered a third of their whisky and concealed it in a plantation, but local farmers refused to reveal its whereabouts to the authorities.
Glen Esk's most notorious whisky maker was Geordie White.  He used to make a great show of volubly cursing the local customs man whom he was actually bribing to ignore his business.  But when a new customs man was appointed he was determined to find the location of Geordie's still.  One of Geordie's rivals informed this official about a path which led to the still.  The man followed the path until he came to a frozen ford.  Geordie White was standing outside his house on the far side of the water.  When the customs man asked him how deep the river was, Geordie informed him that he had been led astray and that the actual ford was four miles upstream.  But the suspicious gauger demanded top see the depth.  So Geordie cracked the ice and stuck in the long handle of his garden fork in at an angle, giving a deceptive idea of the depth.  'Ye see there is nae boddam here,' Geordie said. 'Ye'll hae tae gang up the watter tae the ford.'  The excise man was furious, but rode away upstream.  By the time he eventually arrived at the house of Geordie White all traces of the illegal still were gone. 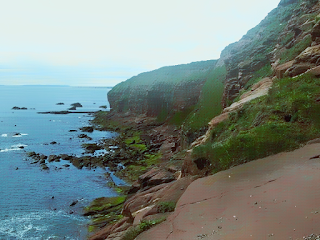