The Dundee Irish and the Other Catholics

There are some who would deny that Lochee, the western suburb of Dundee, at one time represented the most northerly Irish Catholic urban enclave in the British Isles.  This has always amused me, being a native of the place, and a descendant (on one side) of those very incomers.  History can be denied in the face of unimpeachable truths.  I remember sitting in one Lochee pub taking to an old friend – a Rangers supporter – who denied in great detail that there was ever a noticeable preponderance of  Irish in the area.  By that era, of course, the ethnic lines had blurred, the tenements and hovels had gone and the accents of all were indistinguishable from each other, whatever the surname was.  For me, the recognition of changing times came when I saw, in the early 1980s, a man walking boldly into a Lochee supermarket wearing a Rangers football top.

In the 19th century the incomers from Ireland were attracted to the booming jute mills of the city, many of which were thronged in the valley of the Scouringburn, an area between Lochee and Dundee.  A chillingly hostile picture of these newcomers is given by local author James Myles in his Rambles in Forfarshire (1850, p. 25).  He notes that, within living memory, the vicinity of Scouringburn had been entirely rural, but now the district contained more crammed inhabitants than the whole town possessed a century before.  A great proportion of those who lived here and worked in the local spinning mills were Irish:

and it is deeply to be lamented that the vast hordes who have migrated to the Scouringburn are composed of the most debased and ignorant of their countrymen.  Their vile slang and immoral habits have seriously injured the general character of the poor population of Dundee, and I believe throughout Scotland.   The low Irish are not a very improvable race.  They cling to their rags, their faith, and their filth with all the besottedness of perfect ignorance and stupidity.  They appear impenetrable lumps of humanity – quite impervious to the actions of external circumstances, - hence the poorer Scotch have become assimilated in manners and customs to them.  The customs now prevalent amongst the poorer classes on Sunday of standing in their every-day clothes in groups on the street – sitting on outside stairs, and smoking – carrying water from the wells – tippling at counters – and swearing by the name of our Saviour – are all derived from the examples of the vulgar Irish who within the last fifty years have, like the Goths and Vandals of old, deluged all the manufacturing towns of modern civilisation.

The year after the publication of Rambles in Forfarshire, 18.9% of Dundonians were recorded as being Irish born, with only Liverpool having a higher percentage of Irish  inhabitants in the U.K.  (In Scotland, Dundee edged out Glasgow, which had 18.2% Irish in the same year.  Paisley had 12.7% Irish and Kilmarnock 12.1%.)  One estimate would suggest that 9% of Dundee’s population had been Irish in 1841, so that figure doubled in a decade.  In the 1830s a new Catholic church was constructed in the burgh, confidently able to take over a thousand people in its congregation.  An important comment came from the senior Catholic cleric in the town, Rev. John Macpherson, who stated in 1834 that there were only around 50 Catholics in Dundee two decades previously, but a moderate current estimate put that number:

upwards of three thousand souls, the annual number of baptisms being about one hundred and thirty.  This rapid increase is to be mainly attributed to the great influx of Irish Catholics, who, for want of employment in their native country, are obliged to look elsewhere for those means of support which they are unable to obtain at home. The flourishing state of trade in this town, and its increasing prosperity, has drawn to it great numbers of them, and enabled them to find constant employment in various branches of industry.

Another estimate, in 1847, reckoned Catholics in Dundee numbered between 9,000 and 10,000.  An important point is that Macpherson and many Catholic priests were in fact native Scots who originated in Highland enclaves such as Banffshire and ‘holy’ Morar.  Richard McCready notes that the senior Catholic priest in Dundee as late as the 1930s was Monsignor John Turner, a native of the Enzie in Banffshire.  He points out that the majority of Scotland's Catholic bishops immediately after the restoration of the hierarchy in 1878 were Scots. In fact, no Irish-born bishop was appointed until 1985.  The interaction between native Scottish and Irish Catholics in places like Dundee is something of a hidden history.  On ground level, in the churches and schools, there was a heavy Irish influence.  As a personal aside, my mother in the 1930s remembered with some bafflement being made to wear green ribbons in her hair on St Patrick’s Day, resulting in animosity from Dundonian Protestants.  Her family came from North-East Highland stock.

Returning to James Myles, his account of the late 18th century Catholic community in Dundee is strangely in contrast with his virulent hatred of the contemporary Irish community.  The Catholic chapel in 1791 was in a building on the north side of Hawkhill:

It was a small apartment, so small that it is now used as a kitchen of a working-man’s house… and their clergyman…lived in the upper flat of the same humble building.  He preached every alternate Sunday, and his congregation consisted of eight individuals.  [Compare this figure with the 20 Catholics living in Glasgow in 1778.]  His other ministerial station was at Cobhall about half way between Perth and Dunkeld.  He was a tall fine looking man, and wore what was then called a three storey powdered wig, and when he appeared on the streets he carried in his hand a  staff nearly as long as himself, with its head thickly covered with gold.  Mr Pepper was his name, and the ignorant people then thought him a kind of evil spirit who received direct from the Pope a liberal salary for worshipping images! [Rambles in Forfarshire, pp.26-27.]

Bailie Webster, Mr Pepper’s landlord, made the mistake (as he thought) of inviting both the Catholic and Rev Mr Raitt of the Cowgate kirk to dinner one evening.  But happily both got on extremely well at the meal.  As the community grew the place of Catholic worship moved from the Seagate to Medowside.  Lochee’s Catholic community, by contrast, appears to have got off to a slow start.  There were no Catholics apparently in the village before the 1830’s, at which time the settlement was part of Liff and Benvie parish.  But by 1847 there were in the region of 300 Catholics in Lochee who were obliged to march the road and (two) miles to Dundee to worship in the chapel in St Andrew’s, Nethergate, before they acquired a centre at Wellburn and finally a proper church, Our Lady of Immaculate Conception, in May 1866.

There was of course animosity towards the Catholic Irish in Dundee as the 19th century progressed, but the phenomenon of sectarian strife, seen in the west of Scotland and in Liverpool never fully materialised. One reason for this was the preponderance of women among the immigrants (twice as many Irish women compared to men in Dundee in 1871), who arrived to work in the mills, and another was that the Orange Order, prominent elsewhere, was never a major factor in the social make up of Dundee.  There were odd break outs of communal violence, such as a riot in July 1830, bizarrely inspired by the defeat and death of a Scottish boxer named Alexander McKay by an Irish man named Simon Byrne.  There was a minor wave of suspicion against the Irish inspired by ‘Fenian’ incursions in north America and elsewhere in the 1860s.  But the tendency of Dundee Catholics to gravitate towards the Labour and trade union movement rather than militant nationalism mitigated against political and religious trouble.  It has also been noted however that the children and even the grandchildren of Irish immigrants in some parts of Scotland, Dundee included, became more consciously interested in their ethnic roots; the first wave being presumably more concerned with economic survival.

One such son of Irish immigrants was the Edinburgh born socialist activist James Connolly (1868-1916) who moved to Dundee temporarily in 1888 after leaving the British army. While in the city he wrote a letter to Lillie Reynolds in Perth, 17 April 1888, stating about Dundee:  'You could hear at once ... the brogue of every county in Ireland, for there is not a county in the Emerald Isle but what sent its representatives here. I should think Dundee has, in proportion a stronger Irish population than any other town in Great Britain.’  Connolly later died in the Easter Uprising in Dublin in 1916.

Despite efforts from outside to hardwire Dundee’s Irish Catholic  consciousness, there was never the level of support for militant Irish nationalism demonstrated elsewhere, though the feeling was certainly under the surface.  One such outside incursion occurred in 1921 when Archbishop Daniel Mannix visited the burgh and spoke out vociferously in favour of Irish freedom and denounced local M.P. Winston Churchill. The local Irish community kept their identity to some extent through activities like sport, with Dundee United F.C. beginning life as Dundee Hibernian in 1909.  In junior football there was the still proudly extant Lochee Harp, founded in 1904 (one of whose notable stars, Patsy Coleman, was my great-uncle). In terms of Catholic heritage more generally in the late 20th century, W. K. H. Turner states that, in 1963, 20.7% of marriages in the city were in Roman Catholic churches.

Lochee, as it grew, certainly did become a microcosm of Ireland, with one area of housing known as Tipperary (and an adjacent place named Maloney’s Park).  The Irish increased in line with the expansion of the massive Camperdown jute works of Cox’s Brothers, most of whose Irish workers came initially from Ulster. It is a matter of debate about how ‘Irish’ Lochee can be deemed to be now.  I have not lived there myself for twenty years and I suspect that the answer may be, it depends who you may ask (or which pub you choose to drink in).
Luckily Dundee did not suffer the level of sectarian hatred which proliferated in other places in Scotland as a result of Irish immigration, but there was some George Martin tells us that St Patrick's Day in the late 19th century was an excuse for violence between rival communities. A scurrilous rhyme was sung by some Protestants:

Catholics, needless to say, swapped the words and the meaning around! 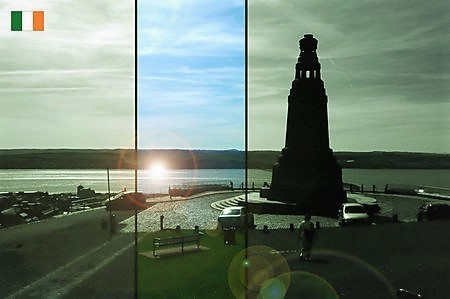